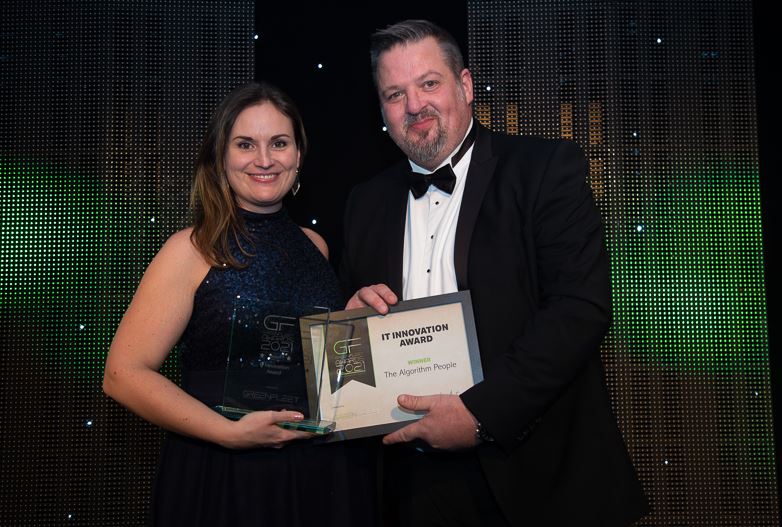 The Algorithm People has won the Greenfleet IT Innovation Award 2021 for its work extending the capabilities of My Transport Planner (MTP) to dynamic optimisation between vehicles.

My Transport Planner, an award-winning optimisation platform in its own right, is the engine of a new project called Mobile and Transient Hubs (MATHs). This uses artificial intelligence, developed through a Knowledge Transfer Partnership with Teesside University’s Centre for Digital Innovation, to allow the optimisation of large ‘feeder’ vehicles which act as mobile reloading stations for smaller delivery units.

MATHs has the potential to revolutionise final-mile deliveries, by eliminating most of back-to-base mileage. It enables the most efficient use of small urban-friendly delivery vehicles by overcoming their relatively small payload, and ensures that electric vehicles maximise available mileage on delivery work, and not non-productive reloading trips.

CEO and founder of The Algorithm People Colin Ferguson says: “We are thrilled and proud to have won this award. It is an important validation by the industry that MATHs can help to decarbonise the final mile of supply chains and make urban deliveries cleaner, more cost-effective and safer.”

MTP can enable fleet savings of up to 20% in terms of productivity and mileage, and MATHs can save a further 20%.

The system has proven its worth in trial with if.Vehicles. The manufacturer’s electric quadricycles have many benefits for urban delivery but are hampered by an impractical payload. However, using MATHs four e-quads and one standard LCV out-performed seven standard vans.

Gateshead Council also more than doubled its delivery of food parcels from 40 a day to 90 using MATHs to optimise its reloading and scheduling.